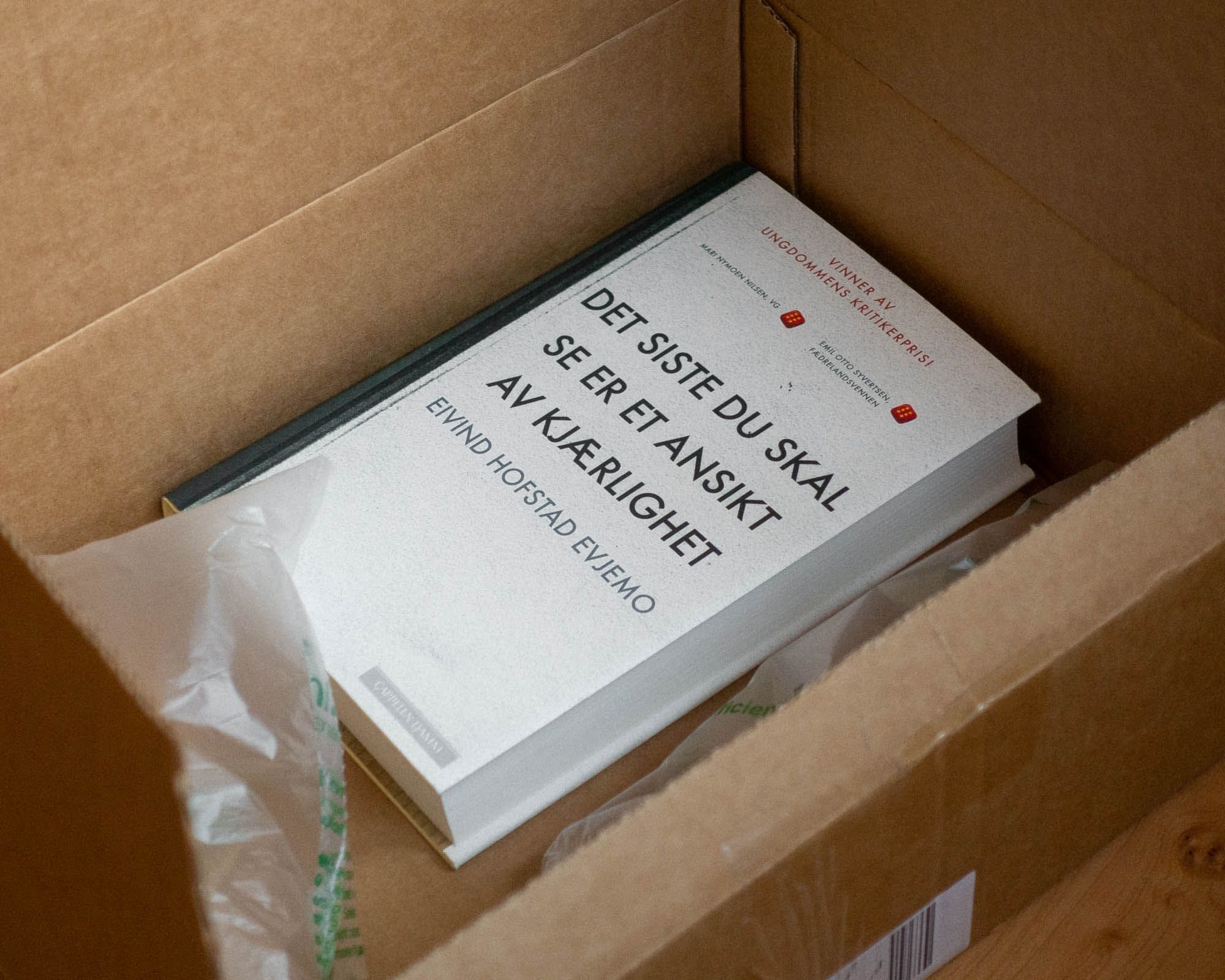 Practically an entire community is described in The last Youwill see is a face of Love (Det siste du skal se er et ansikt av kjærlighet).Even the floor in a gymnasium is given its own tiny chapter. The narrativefocuses on four characters: Roy and his son Aksel, together with Kjersti, whois an advocate for the handicapped school pupil Siri, and finally the headmaster at Aksel and Siri's school. We share their day to day lives as the quietdrama unfolds in a community sheltered by the newly-rich Norwegian state.

Hofstad Evjemo writes about the dreams you hold on to in places wherethe world seems distant – and about everyone sharing the hope that life willoffer something more. But, as we know, this is also about a community: newspaces in it are opened up and you can get in behind the facades, go where noone usually goes, find new patterns and structures. Practically everyone ispresented and has parts of his or her life described: the bus driver, thedriving school instructor, the nurse, the headmaster, the pupils, and the localauthority arts boss – even the Crown Prince, when he visits the college in thetown to give a lecture on climate. We are given a roving, strangely realisticview of the author's dissection of a body of Norwegian reality. Everywhere, heprovides sharp thumbnail sketches of social and communal life.
Eivind Hofstad Evjemo has dared to do something not many in his generation wouldtry: make a community his subject and explore its social hierarchies. He writesin a charged, insightful language.

“Eivind Hofstad Evjemo recreates life in Norway in 2012, down to thefinest detail, in a major candidate for the title “the great Norwegian novel”.… Det siste du skal se er et ansikt av kjærlighet is the kind of book that willchallenge the capacity of the delivery trucks supplying the book shops thisChristmas.”
– Dagens Næringsliv
“This is an extraordinarily well-written piece of Norwegian contemporaryliterature (...)Brilliant: This is an unusually well-written example ofcontemporary Norwegian literature ... Eivind Hofstad Evjemo has an excellentgrasp of style.”
– Klassekampen
“Evjemo writes exceptionally well, with passion, insight and credibility.He is also effective in his use of humour, without being crude or dull. Wesmile with the people in his narrative, not at them. The characters come aliveas nuanced and believable individuals. ... Det siste du skal se er et ansikt avkjærlighet is an ambitious and successful book which stands out among othercontemporary Norwegian novels.”
– Adresseavisen
“Eivind Hofstad Evjemo’s excellent second novel describes individualsand local communities in a maelstrom of ordinary life. ... His language, whichis both realistic and poetic, allows Evjemo to show how ruthlessly time slicesthrough communities and human lives. In this way, Det siste du skal se er etansikt av kjærlighet forms a lucid image of a small part of Norway.”
– Dag og Tid
“Playful and serious… The novel tugs and tears at the facades and emptyclichés surrounding success. It goes to where real human beings exist, closelyconnected with each other. ... In a time when writers compete in describingtheir own, personal life experiences, it is a delight to hold in your hands anovel which insists on describing the ways in which every single human being issincerely connected to others.”
– Trønderavisa
“This novel makes me reflect on the ways in which we organize andsystematize our society, and how we really treat each other in this country,which is always top rated on indexes measuring happiness and quality of life.That a book triggers such ideas in the minds of its readers shows that the texthas taken a long stride in the direction of a socially engaged literature. Welldone in these days of self-revelation and glorification of intimacy.”
– Vårt Land
“This is skillfully written. The result is beautiful.”
– Stavanger Aftenblad
“Clever writing about local authority management … It follows that Detsiste du skal se er et ansikt av kjærlighet is a witty satire, a wise story andsometimes so disquieting that the sum total becomes truly interesting.”
– NRK
“There is a longing in us all that Evjemo expresses sensitively in thislow-key novel, which reaches its greatest heights when it takes the leastthings seriously. It is a humble and very Norwegian insight.”
– Carina Elisabeth Beddari
Eivind Hofstad Evjemo (Author)
Cappelen Damm (Publisher)